So you fancy yourself a beer lover? Of course, you know what ‘IPA’ stands for. If someone hands you a Heineken you shame him with a disappointed look? And drinking beer out of a can is pure blasphemy in your opinion? You are going to enjoy this, beer aficionados.

Austrians in general have a rather heartfelt relation to their liquors and drafts. It doesn’t matter if its wine, beer or spirits, refer to it as ‘culture’ and keep it coming. In a city like Vienna, surrounded by Austria’s finest wine regions supported by a century old tradition, wine has been the primary alcoholic beverage of taste for a long time. But recently local breweries have picked up the Zeitgeist and stepped up their game by establishing a craft beer culture in Austria.

Actually, what is craft beer? For real.

No, craft beer is not a way to market overpriced beer in small bottles to a bourgeois-bohemian target group, whose sole goal it is to do things differently, thus the term is lacking a clear definition. Since Wikipedia is also lacking for a practical definition, we took it to the Brewers Association to get hold of a fitting description. According to the BA to call your beer a true craft beer, you have to be a small brewery, looking for innovation in taste, whilst using traditional brewing ingredients like malt and adding non-traditional ingredients for distinctiveness. In addition a craft beer brewer is to the largest part independent and seeks to connect with customers directly and individualistically.

Luckily for beer fans, bars and pubs reacted quickly and the list of craft beer vendors is already too long to be summed up in one blog post. Even better, the guys of proBIER.at, an Austrian Beer Blog, have created a subway map highlighting the most important craft beer locations in the city. 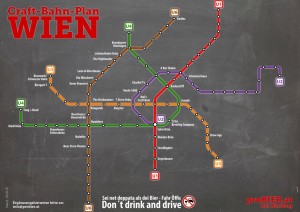 If you are looking for the craft beer experience at home or as a gift the guys from stadtbekannt.at have put together a list of Vienna`s craft beer shops including

Whilst craft beer is part of several food and drink festivals, in the form of tastings, Vienna has its own dedicated craft beer fest, taking place for the fourth time on 21st – 22nd November. Leading up to this event the first‘Vienna Beer Week’ is hosting beer related events all over the city. Beer fans all over the city are expecting a tastefull fall. In that sense: Prost!