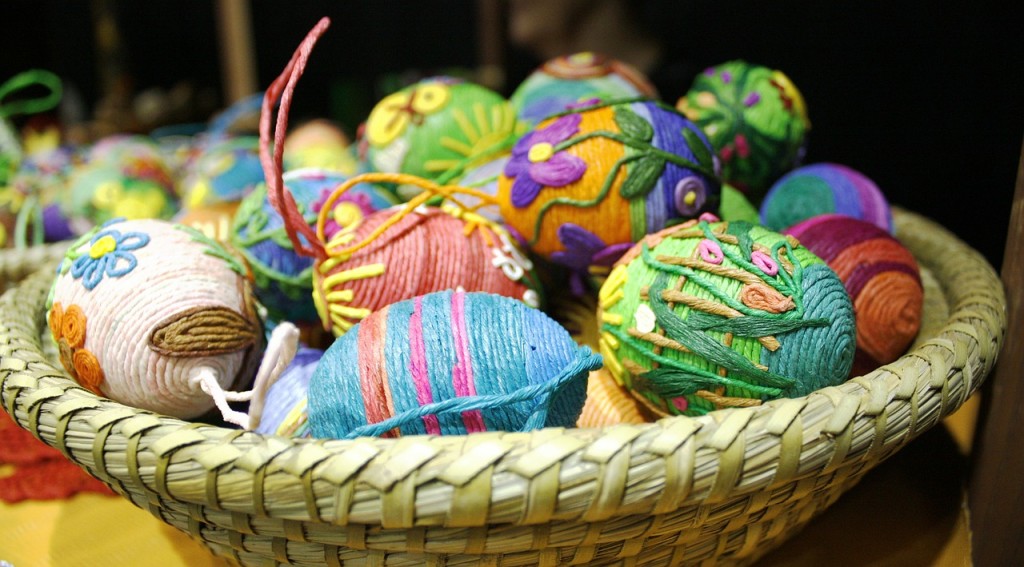 Happy Easter (Frohe Ostern)! Easter in Vienna and in all of Austria is observed both Sunday and Monday. Many of the smaller stores and most offices close mid-afternoon on Good Friday and do not reopen until the following Tuesday. Austrian students get Tuesday off also. The Easter celebration for some in Vienna may be secular, but the trimmings stemming from those celebrations are steeped in religious custom.

Food plays a prominent role in any holiday, and Easter is no exception. The pig has always been a symbol of good luck and prosperity among Indo-Europeans and the age-old custom of eating pig or boar meat is still alive, also you might find lamb on the menu, or rabbit and not the chocolate kind. (This was a shock on my first Easter here, and I had to remark to my partner we usually did not eat the Easter bunny where I came from.)
In addition pastries and bread also figure prominently into Vienna’s Easter fare, Easter bread with raisins is baked in twisted or braided strands and with the coffee later the traditional Sachertorte might be served.
At many Easter dinner tables you will find a basket of dyed eggs and of course a nice wine and a lovely centerpiece made from pussy willows mixed with spring flowers like tulips with and beautiful hand painted Easter eggs hanging from them.
Easter dinner like other meals in Vienna are a time to slow down and enjoy the time with family and friends, so don’t be surprised if a few hours later you are still sitting at the table. If this is your first Easter in Vienna got to a concert in one of Vienna’s, churches or a walk through one of the numerous Easter markets, but most all “genießen Sie den Moment”

The date of Easter

Easter is an annual festival observed throughout the Christian world. The date for Easter shifts every year within the Gregorian Calendar. The Gregorian Calendar is the standard international calendar for civil use. In addition, it regulates the ceremonial cycle of the Roman Catholic and Protestant churches. The current Gregorian ecclesiastical rules that determine the date of Easter trace back to 325 CE at the First Council of Nicaea convened by the Roman Emperor Constantine. At that time the Roman world used the Julian Calendar (put in place by Julius Caesar).

Austrian Easters : Some Of Their Symbols And Customs

If you look back through the centuries at some of the symbols and customs associated with Easter, curious origins emerge. In the early days of Christianity, the church incorporated many pagan rites of spring into its Easter celebrations as it struggled to gain acceptance as the primary religion in Europe. Pagan rituals using bells, drums, bonfires, processions, and dancing, all once employed to drive away the bad spirits of winter and celebrate spring, were adapted by early Christians to celebrate Christ’s Resurrection instead.

In the Alpine provinces of Austria, Easter fires burn on mountain peaks after sunset on Holy Saturday, and bands of musicians go through the towns, playing sacred hymns.
They are sometimes called Judas fires, because effigies of Judas Iscariot are frequently burned in them. The Easter eve bonfires predate Christianity and were originally intended to celebrate the arrival of spring. The burning effigy once symbolized winter.

Before the invention of the printing press, the church relied on visual aids such as paintings, sculpture, and even theater to teach the illiterate the gospel and to spread the faith. Passion plays focused on the events surrounding Christ’s Crucifixion and Resurrection. These plays were popular in the Middle Ages, but by the second half of the 18th century, largely forbidden. In Austria though, they can still be seen. The oldest from 1613 is performed in Erl in Tyrol every six years, as well as in Thiersee, also in the Tyrol, and for 200 years at the Roman quarry in St. Margarethen in the Burgenland. These plays, however, are performed during Lent or Easter, nor are some performed year.

The Osterklang Festival is Vienna’s Easter concert series, welcoming some of classical music’s biggest names to venues across the city. The world-class Vienna Philharmonic Orchestra usually performs, and the concerts tend to reflect the story of the Passion of Christ.
For further details of this year’s programme, please visit the Osterklang Festival website.

There has been an Easter market for 350 years around the Kalvarienberg Church in the 17th District (tram 43). Among the many offerings a typical toy found in this market is the tree climber, a carved manikin which can be made to climb up and down a stick. It is supposed to be a replica of the biblical Zacchaeus, who climbed a tree in Jericho, the better to see Jesus. This market runs from Ash Wednesday Until Easter Monday daily 10:00 a.m. – 6.00 p.m.

Traditional Viennese Easter Market along the Feyung. Merchants from Vienna and surrounding areas will offer numerous beautiful and traditional easter decorations – more than 35.000 easter eggs in all variations, easter candles, palm leaves, flowers, stoneware, ceramics, eggs in different sizes, toys and handcraft from all over Austria. There will be also easter-snacks from Austrian provinces.
Easter-puppet-performances, workshops and a traditional music-programm on the little stage beside the easter tree. Freyung square in the 1st district – close to Schottenkirche – is one of Vienna’s most beautiful squares.

The Baroque surroundings of Schönbrunn Palace form the backcloth for a presentation of Austrian Easter customs and traditions.
Easter decorations – Easter eggs in all variations, palm leaves, Easter candles and flower arrangements – will be on show together with artefacts from all over Austria, including glassware, ceramics, stoneware, tin toys, straw animals and beekeeping products
There will also be freshly prepared snacks from Vienna and the Austrian provinces.
For children, there are Easter games and workshops where they can make Easter bunnies and other objects.

There are numerous other Easter markets in districts throughout the city offering huge varieties of hand-blown decorated eggs, carved bunnies, assorted other wooden toys, handicrafts, sprays of spring flowers and the lamb and baked goods for your Holiday meals.